Paris/ Berlin, 03.02.2020 – Ato Kubik and Your Care Consult advised Group Mohring/ Vital Wohnen for the sale of the company.

The sale was successfully completed in December 2019 with the acquisition of 16 Nursing Homes (partially already up and running and partially recently opened or to be built), 3 of which includes their real Estate. All premises are located in North Rhein Westfalia.

The sale will be completed after the approval of the relevant Antitrust committees.

The Mohring Group, established in 1996 by the Mohring family, further developed with Vital Wohnen (a JV with Investors from Hamburg).

Alloheim was founded in 1973 by Alois Mollik and is a major German player.

With this acquisition Alloheim considerably reinforces his footprint in North Rhein Westfalia and will reach a total of 24.000 beds under operation in Germany.

Threestones Capital  is an  independent European investment management group managing private equity and real estate regulated investment vehicles with a Total of EUR 1,6 B AUM specialised in Healthcare investments for more than 10 years.

A few headlines on the transaction:

Aderhold Rechtsanwaltsgesellschaft mbH, Dortmund and ARQIS Rechtsanwälte, Duesseldorf were the legal advisors of, respectively, the Seller and the Buyer

Recent activity in Spanish psychiatry and mental health suggests growth on this market is picking up speed. Who are the emerging consolidators? We speak to market experts following this space.

Private equity began making inroads into the sector in 2016 when Iberian investor Magnum Partners bought a 75% stake in eating and behavioural disorder specialists ITA. The company, which saw revenues of €13.4m and net profits of €1.7m in 2017, bought Previ group last year, a business with four centres in Valencia, and a psychiatric clinic in Godella. This year, under new CEO Jaume Raventós Monjo, the company has already acquired a new centre in the Barcelona region and expanded to Chile, joining competitors Grupo 5 and DomusVi.

Grupo 5, backed by Corpfin Capital since 2017, operates in a segment called ‘psychosocial rehabilitation’ and is mostly contracted by regional authorities to deliver community-based care with a mix of home care, outpatient and inpatient facilities. Last month the company acquired a neurological treatment centre in Navarra, and it announced aggressive plans to expand across the country last year.

The big fish here – DomusVi – had been focusing its expansion in its reference market of nursing homes, but this year it created the brand Mentalia Salud under which all eight of its psychiatric and mental health facilities will operate. The group acquired a facility in the Canaries with 74 beds last month – bumping DomusVi’s total mental health offering to 1,000 beds, run by a team of 550 employees.

“The private sector is playing catch up here,” says Stéphane Pichon of Your Care Consult. “We think there will be new entrants onto this market from European groups other than the French – possibly from Germany or the Netherlands.”

Even Orpea joined the bid for a position, with its acquisition of 82-bed facility Clinica Lopez-Ibor (€5m) in 2017. But a leading consolidator has yet to emerge.

“The private offer is really fragmented,” says David Alberti of Your Care Consult. “There is margin to consolidate, but with small deals. Historically, the sector has been dominated by religious orders who remain the most active players,” he adds.

“The biggest is Hermanas Hospitalarias holding 43% market share with 6,000 beds. Though non-profits are currently investing capex into current facilities and also developing homecare and daycare, it is possible private players could buy out non-profit facilities.

“One of DomusVi’s strategies with nursing homes is to buy from the Church,” adds Pichon. “So it’s something they could replicate in mental health.”

Our Analysis: The Spanish mental health sector is seeing momentum pick up as private equity and large French groups roll out their growth strategies. For now, opportunities for investment abide in small private settings, but with such a large portion of beds owned by non-profits and the public sector, it remains to be seen how the private sector will consolidate its share. Will a single consolidator emerge? Perhaps a player that can crack the delivery of integrated services – which, according to ITA’s CEO Raventós Monjo, is the private sector’s next challenge – will set themselves apart. 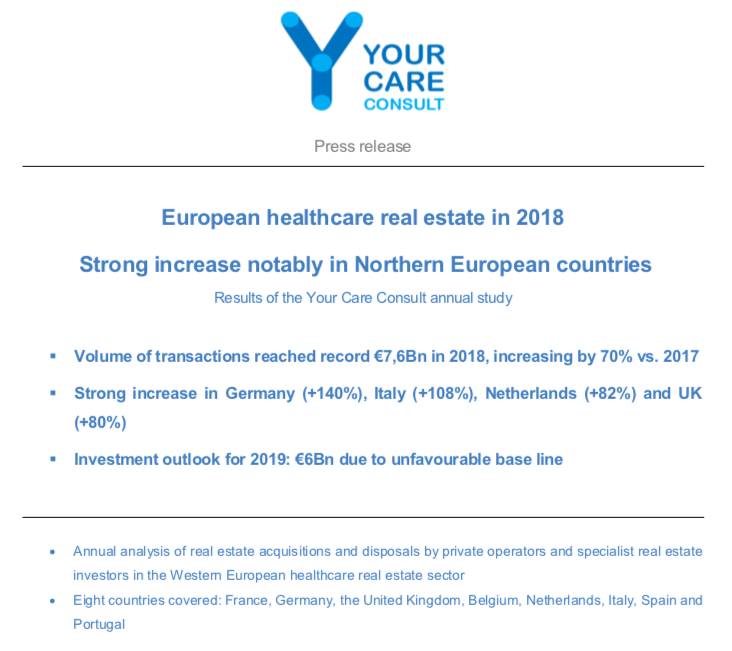 DomusVi is in exclusive talks to acquire a top ten French player in a bid to keep pace with rivals Orpea and Korian. We speak to a market expert about the deal and give a likely price multiple.

DomusVi, France’s largest nursing home operator by revenue, is in talks to acquire French group HPA, which owns nursing home operator Residalya and property company Patrimoine et Santé. The group had revenue of €120m in 2018 and EBITDA of €21.5m in 2017. We believe HPA is likely to go for a low double-digit multiple.

The deal will see Domus Vi buy the entirety of HPA’s share capital, taking over the operation of 35 nursing homes and residential facilities around France, with more than 2,500 beds. Residalya has 1,700 employees. The group owns the real estate of 12 of the facilities it operates and is developing three new facilities to be opened in the next two years.

“It’s quite expensive to buy in France due to the licence system, so you’re essentially buying market share,” says Stéphane Pichon of Your Care Consult. “Clearly then HPA will go for a double-digit multiple, perhaps 12-13x EBITDA. DomusVi is in a race with Korian and Orpea to maintain its position on the market, where the smaller companies are being acquired by the top players.” A price of around €280m seems likely.

Armonea was acquired by Colisee last month for 12x EBITDA, and acquisitions are the main tool used by French groups to grow in nursing homes. Though operators have also been diversifying their activities by providing domiciliary or medicalised homecare – Korian bought provider Petit Fils last November, and Orpea is acquiring assisted living facilities across Europe.

“Residalya used to be a subsidiary of Groupe Duval, a large real estate operator in France,” says Pichon. “They were partners at the group level with Dutch shareholder Ackermans & van Haaren.” Groupe Duval sold 70% its stake to Ackermans & van Haaren in 2015, and in 2018 Residalya became French real-estate investor Icade Santé’s first acquisition in the nursing home sector, when it bought 14 facilities for €189m. “This latest deal could be used by founder Hervé Hardy to either retire or buy new assets,” speculates Pichon.

DomusVi has been actively buying in Spain, Portugal and France and is also present in Chile where it bought nursing home group Acalis last November. The group had sales of €1,300m in 2017, with a total of 333 facilities across all locations.

Any deal will be subject to the approval of the French Competition Authority. It is expected to complete in Q2 2019.

Korian, France’s largest nursing home operator by revenue, has made a deal with its main property owner to build at least seven new facilities in the country. We speak to French healthcare real estate expert Stéphane Pichon about the deal.

On Monday, October 15, Korian signed an agreement with healthcare real estate developer CAREIT and property investor Primonial REIM, its main landlord. The former will act as advisors for the conception and construction of at least seven new rehabilitation facilities and medicalised nursing homes, while Primonial will supply funds and acquire all or part of the real estate of each facility.

“These are three complimentary structures, and the idea is that each entity focuses on its core business,” says Pichon. “CAREIT has been working with Primonial for two or three years now, and Primonial already owns a portion of Korian’s buildings, so these people know each other very well.”

The sector has a few different models in operation across the market, he adds. “Orpea and LNA Santé, for instance, have a completely different model where all of these tasks are internalised. They feel best placed to carry out construction at the right price, so that rent is not impacted by development margins.”

Korian made a similar deal with real estate investment company Icade last year in efforts to renovate a quarter of its housing stock. A lack of bed licences has put the breaks on organic growth, so the company has moved its focus to renovation, building assisted living facilities and opening geriatric clinics and hospitals.

“This partnership allows Primonial REIM to secure a position upstream of new investment opportunities while reinforcing its relationship with Korian,” says chairman of the board at Primonial, Grégory Frapet.

Korian plans to grow its current offering of around 750 facilities across Europe by another fifty before 2022. The group’s expansion was boosted this quarter by Korian’s acquisition of the remainder of Senior Assist’s Belgian portfolio, totaling 1,800 beds. Its acquisitive activity continues to fuel high growth abroad, with the group reporting 15% growth in both Belgium and Italy for Q3.  Though this is in stark contrast to its domestic business where growth is a mere 3.6%.

Korian’s share price increased 10% on October 15th, the day of the announcement.