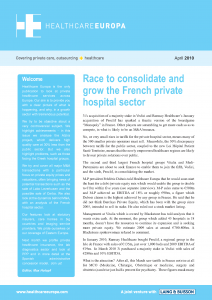 Private equity interest has been reignited, but remains frustrated by the lack of decent management teams. It is not hard to see the attraction of care homes. The number of 85s in Western Europe is expected to almost treble by 2050 leading to big increases in demand. Alzheimer and Alzheimer like sufferers are expected to rise 50% to 1.2m in France by 2020. Hikes are particularly likely in southern Europe which has historically been adverse to the idea of care homes. Today in Italy only 2.7% of those over 65 live in specialised facilities compared to 5.4% for the UK and 6.1% for France. Yet Italy has approximately 12 million people aged over 65 compared with approximately 10.7 million in France. Growth rates are impressive. We were told that over the last 4-5 years the Spanish market was growing at 7-8% per annum for residential care and 15% for domiciliary. Growth elsewhere is much lower – 2% in France and maybe 3% in Germany.

Yet older people does not necessarily equate to more care beds. Stephane Pichon at Your Care Consulting in France says: “states will not be able to afford this burden. There will have to be other solutions involving remote monitoring.”

French operators are bracing themselves for changes which are likely to mean lower margins and lower prices. Today an operator can propose a new care home to a region and then set the prices for incomers. Under the new Loi Hôpital Patient Santé Territoire which will come in this autumn it is the regions, not the care home operators, who propose where new homes are needed. This will be followed by a competitive tender, in which the proposed price charged to patients will be examined carefully.

Average prices are likely to drop, says Stephane Pichon. Korian, one of the big operators is preparing a new range at €60 a day down from an average of €75.

The big players have been able to build or renovate and build big pipelines of future business. Nor are margins bad. Pichon puts the average at 25% but says that a full renovated asset can make 30-40% EBITDAR.

Pichon says the new law is likely to lead to a change of strategy from operators.

“It means more acquisitions within the sector and a lot of diversification.” Orpea and Korian are already get 30% or so of their sales from psychiatric and rehab and this could increase.

International private equity is currently absent from the market following BC Partners flotation of Medica, but Pichon says most of the smaller operators have backing from small private equity or family offices. Insurers like the sector and are big investors in the listed groups.

This means residents tend to be really ill and typically last just 18 months.

Stephane Pichon, a French observer says: “It is much more medicalised than France and many homes have kit like dialysis – the sector is more mixed.”

Of the big six groups, half are subsidiaries of the three French giants and La Villa is half French and half Italian.

Your Care Consult
63 Avenue Marceau, 75116 Paris
Get directions
01 47 04 86 91
We use cookies on our website to give you the most relevant experience by remembering your preferences and repeat visits. By clicking “Accept All”, you consent to the use of ALL the cookies. However, you may visit "Cookie Settings" to provide a controlled consent.
Cookie SettingsAccept All
Manage consent

This website uses cookies to improve your experience while you navigate through the website. Out of these, the cookies that are categorized as necessary are stored on your browser as they are essential for the working of basic functionalities of the website. We also use third-party cookies that help us analyze and understand how you use this website. These cookies will be stored in your browser only with your consent. You also have the option to opt-out of these cookies. But opting out of some of these cookies may affect your browsing experience.
Necessary Always Enabled
Necessary cookies are absolutely essential for the website to function properly. These cookies ensure basic functionalities and security features of the website, anonymously.
Functional
Functional cookies help to perform certain functionalities like sharing the content of the website on social media platforms, collect feedbacks, and other third-party features.
Performance
Performance cookies are used to understand and analyze the key performance indexes of the website which helps in delivering a better user experience for the visitors.
Analytics
Analytical cookies are used to understand how visitors interact with the website. These cookies help provide information on metrics the number of visitors, bounce rate, traffic source, etc.
Advertisement
Advertisement cookies are used to provide visitors with relevant ads and marketing campaigns. These cookies track visitors across websites and collect information to provide customized ads.
Others
Other uncategorized cookies are those that are being analyzed and have not been classified into a category as yet.
SAVE & ACCEPT